The first Geronimo was built in 2002 in the interim between when Chris began to plot his move to Nashville and his actually leaving NYC. Named after a favorite childhood pet of his father’s, this Geronimo featured a similar but smaller body and a pair of pickups styled after a popular ‘50s model by a well-known California builder.
The second Geronimo was built the following year and featured a much larger body and included a separate control plate. This was inspired in part by Chris’ history on the repair side of the business. Easy access to the control assembly without having to remove strings, remove entire faceplate, etc. made addressing simple matters such as a scratchy potentiometer or cold solder joint a breeze! Then 2004 brought Chris the opportunity to move into the Engineering Dept. at Custom and for the next four years he dedicated his creative energy to that job.
Once Chris left Gibson Custom he used every stolen moment he could to make Geronimo a unique guitar with a voice of its own. Years of tweaks to the design and electronics were followed by more than a year and a half of road testing which continues to this day. Feedback from professionals has been an invaluable contribution to the development of this guitar. We hope you have the opportunity to try one out. 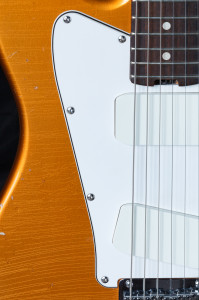