Chris Swope’s guitar building path started in 1986.  As a college sophomore, he and a few friends rented a house that backed up to Mass. Street Music in the then sleepy town of Lawrence, Kansas.  After a few years of hanging out in the shop, owner Jim Baggett, (Antiques Roadshow, Heritage Auctions), allowed Chris an apprenticeship of sorts and years later urged him to go to New York and even offered a couple of contacts, including Roger Sadowsky.

The Sadowsky Years:  From 1995-2002 Chris served as production manager for Sadowsky Guitars in the heart of Manhattan’s Time Square.   Not only did Chris receive an expert education on building premium electric guitars and basses he was also heavily schooled in the vintage world.  Sadowsky’s shop was 50% building and 50% repairs.  The clientele was star-studded and the guitars that came in were the stuff of dreams; pre-war Martins, vintage Fenders, Gibsons, Gretsches, Rickenbackers … even D’Angelicos.  You name it, it was there.  A more well-rounded education would be hard to find!

The Gibson Custom Shop Years:  From 2002-2008 Chris held down a bench first in the Pro Shop and then moved on to the Engineering Dept. where he served four years as Engineering’s man on the floor.  Among other things, one of his principal responsibilities, (and the most fun), was an involvement in the prototyping of various models.  He even designed a few guitars and that opportunity served as his introduction to pickup construction.  By this point, Chris knew that what he ultimately wanted and needed to do was design and build his own guitars…..

The PRG Years:  From 2008-2013 Chris served as a Guitar Advisor for Private Reserve Guitars dealing specifically in the high-end.  After 6 years at Custom Shop this new gig allowed Chris a window inside all the other “Cadillac Brands” and a critical understanding of the other side of the business.  All the while getting his ducks in a row to start Swope Guitars. 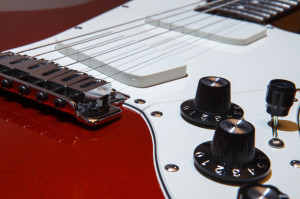